The Wells Home in Otranto, Iowa

The Wells family grew up in a small farming community in North central Iowa; Otranto was the name of the town. The town was
small, only two square blocks, and everybody knew everybody. The first family’s home burned down in 1949 killing Harold’s wife Marjory

Vern with his mother Marjory

and three of his children, Harold Gary; bd:12-26-44, Leslie
Keith; bd:06-03-47, and Barbara Ellen; bd:12-12-46.   Vern Lynn; bd:09-14-42, and David Lee; bd:12-03-43, were the sole survivors of the first family along with Harold.  David, was
locked into the small post office around the corner of the block where the house stood so he wouldn’t go over there and run into the home while it was burning.  David was lucky that Harry
Dockstetter, the postmaster, locked him in as he surely would have run into the house and died too.  Vern was in the school across from the home and watched the smoke rising from the roof.
His teacher, Miss Austinson, saw his mother run in and not come out.  She made Vern sit at his desk and cried visibly while she told him to be a brave young man.  It was a horrible
tragedy. 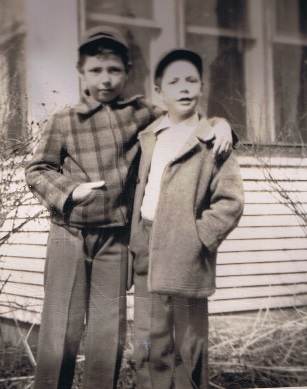 The boys and Harold  went on to live with Harold’s parents, Horace and Sybil Wells, on the family farm North of town.  The fire devastated his brother, David.  It took
many months for him to finally come to terms with the loss of his mother and siblings.

Their father remarried, Irene Leone Riggins, one year after the fire and they had four sisters and two
brothers from that marriage.  Nancy Jo; bd:10-11-50, Karolyn Irene; bd:11-14-52, Daryl Dean; bd:04-20-54, Wendell Harold; bd:07-21-56, Diane Kay; bd:12-26-59, Janice Ann; bd:01-01-61.
Wendell died from electrical shock in 1963 while in the bathtub. They were a close knit family and suffered many hardships on the farm. Money was hard to come by and their father and mother
used to play at local dance halls in the communities that surrounded their farm to subsidize the family income. The children led a very sheltered life, kind of like Huckleberry Finn and Tom Sawyer,
on the farm. They spent many hours at the Cedar River under the Milwaukee Road railroad trestle swimming and fishing. It seemed that there was never a dull moment on the farm. They also had a lot of
fun building grass forts across the road from the house and in the grove behind the house. In the winter they would build igloos in the ditches. There were animals to be looked after too. Harold
raised pigs, cattle, and chickens. The two older boys, Vern and David, spent many hours chasing pigs from the corn fields when they got out. Vern graduated from Carpenter High School in 1961 and
joined the Army that next fall. David graduated from St. Ansgar High School the next year. Nancy went on to Grafton Middle School and when the family moved to West Bend, Wisconsin in 1965 she graduated from Badger High School in 1967. Her class was the last one to graduate from that school. Karolyn was the first one of the children to graduate from the new West Bend High School. The exact
date is not known at this time. Daryl dropped out of high school and moved to Marble Rock, Iowa where he now resides. He has been working in Mason City, Iowa for years. In 1965 the family migrated to West Bend, Wisconsin and settled in at the home where Gary and Karolyn Taylor now reside. In 1969 Harold and Irene purchased 2 acres of land at 2242 Wallace Lake Road, 3 miles Northeast, of West Bend and built a home. This home was a “family”. Everyone had a hand in building it. The family pounded nails, dug sand, mixed concrete and mortar, and built the house piece by piece until it was completed in 1973. There were many hardships to the family as this project went underway. The first winter the family had to stay in the horse barn until Harold had the lower level completed well enough to move into. They moved into the lower level after the first snows came that year. They heated
the lower level with a kerosene stove that was used in the horse barn. It was a cold and hard winter for them. They lived in that home until 1976 when they moved to Marble Rock, Iowa. The younger
children, Diane and Janice graduated from a correspondence school. Nancy married a young artist, Richard Morgan, from Waukesha, Wisconsin. When he asked Harold for Nancy’s hand in marriage, Harold
told him if he would shingle the East side of the family home he would allow him to marry one of his daughters. He shingled the roof and when he was done, Harold told him he could marry Diane. Of
course Harold was playing with him and blessed the marriage between Richard and Nancy. They were wed in 1970 and lived in Waukesha for a few years. When the family moved to Marble Rock Nancy and
Richard moved with them. Richard worked at the family shop and helped Harold in the fields but wanted more out of life and continued to perusue his career in arts and eventually they moved to Sioux
City, Iowa where he has worked for the past 20 years. Nancy went to her mother’s alma mater, Hamilton Business School in Mason City and graduated in 1981 and after they moved to Souix City she worked
for the State of Iowa for 17.5 years before she went to work in the judicial system as a court attendant/clerical and has retired as of 12/19/2006. Karolyn married Gary Taylor and they bought the
family home from Harold. In 1976 Harold and Irene moved to Marble Rock, Iowa and Vern bought the family home on Wallace Lake Road in West Bend. David and his wife, Diane, moved to Marble Rock along
with Daryl and Janice. David and Diane bought a small acreage north of Marble Rock and have been there for over 12 years now. David’s oldest son, Steven, is married and lives in Marble Rock. David’s
second son, Kevin, also lives in Marble Rock. David’s oldest daughter, Melinda, is married and lives in Mason City, Iowa. David’s second daughter, Laura, lives in Nora Springs, Iowa. Janice
eventually married Randy Johnson, an Iowa farmer, and they lived on a farm there until he died. Janice eventually moved to Sioux City, Iowa where she currently resides. Vern retired from Tower
Automotive, the A.O.Smith company, in 1997 and sold the family home in 1998, bought a 5th wheel RV and now lives in Lake Charles, Louisiana.
There are many tales to be told by all in this family and it would make a good book if they were told.